Psycho Killers and the Women Who Love Them: Harley Quinn, Abuse, and Cosplay Pt 2

Psycho Killers and the Women Who Love Them: Harley Quinn, Abuse, and Cosplay Pt 2

You can find Part 1 of this series here.

In last week’s installment, we discussed Harley Quinn’s history, and her deep connection with abuse. This week, we speak to cosplayers about their connections to the character. Trigger warning: this article discusses abuse specifically.

“I do have a history with an abusive boyfriend,” cosplayer Misses J Quinn told us. “I feel very connected to Harley because of this. It is not a healthy relationship. I think no one deserves to experience an abusive relationship.” She wasn’t alone.

Cosplayer Zoe Anderson said, “It goes all the way back to living at home and watching my parents do the same thing that I would see repeated. You might say I had become desensitized or, perhaps even blind to what was considered abuse. I’d let my boyfriend smack me around, blame things on me, cheat on me, and more.” Her understanding of the connection between her and the character wasn’t obvious to her. “As I saw glimpses of her past home life and then looking in at my personal relationships I could definitely see it. The more I looked at it, the more the two seemed to blend together, and I was desperate for a way to express this.” For Anderson, that expression was cosplay. “Cosplay has definitely given me a way to healthily express myself. It is something that helps my mental well-being and it does make me feel pretty damn good all around. All you get is compliments.”

This sentiment was echoed by several cosplayers, including Becca Payne, who told us, “Cosplaying makes me feel like who I am on the inside and to me, that is healthy.” Savannah Kelly said, “I think that cosplay should be judgment free and should include everyone who is willing to put the effort into cosplaying.”

Becka Taka Cosplay tells us cosplay was important to her ability to manage her depression, and Harley Quinn was a part of it. “I was months into the worst depressive period of my life. There was a cosplay function being held in the area on my birthday and I forced myself to attend. I ran around as a princess, then later (a few drinks later) changed into a cute Harley themed dress, complete with mismatched shoes, mask and poofy pigtailed wig. I think my extreme love for her was born then. I mean how can you NOT have a good time dressed as her?”

Taka’s story echo’s many of the elements of the 1994 Mad Love story. “I immediately felt a connection, like the world stopped for a moment when I met him. He was more than a little shy but we could talk for hours. He was damaged. He had led a hard life and it was like I came into his for a reason. Like the idiot empath I am, I felt his pain. I wanted to heal him. I foolishly thought ‘He just needs someone to love him.’ I honestly thought I was that person. The rest was a whirlwind of passion, late nights talking, him needing me, me needing to be needed… It has been said that when you look at the world(or a lover) with rose tinted glasses, that all the red flags look like just… flags. Nothing, could be closer to the truth. I was warned by friends. I was begged to stop what I was doing. But I was under his spell and it was a powerful one at that.”

“The day we signed the lease, was almost exactly the day he changed into a monster. You see, he had gotten exactly what he wanted. He lived in a shitty room, in a shitty part of town and wanted nothing more than to get out. I was also desperate for a place to live and either intentionally, or not, I was made into his victim.”

What followed was also similar to Harleen’s story, one of first mental and emotional control that became abuse, and then abuse that became physical. “I absolutely feel a connection to Harley because of my past. Here you have a character who is at the pinnacle of her career, beautiful, athletic(she was a gymnast) and getting the opportunity to study one of Gotham’s most notorious criminals at the Arkham Asylum. Before I met the man that brought my life to a screeching halt, I was confident, at a healthy weight, and planning a career in either Vegas or Atlanta. After he got in my head, I was driven to near madness. I completely lost sight of the well adjusted person I once was before I met my abuser, yet much like Harley, kept coming back again and again for more abuse.”

While disturbing, Taka’s history is not unusual. Of the cosplayers we interviewed, 90% said that they had some history of abuse, be it physical, emotional, or mental. Our interviews were 80% female, 20% male. These numbers have little to do with cosplay, and instead mirror national statistics. According to the National Network to End Domestic Violence, approximately 7 million women in the U.S. are assaulted or raped by a current or former partner each year. Love is Respect reports 43% of dating college women and 28% of men reported experiencing violent and abusive dating behaviors in a relationship.

“I was a stupid teenager that fell in love for dumb reasons and let myself get caught up in that relationship because it was there and I’ve always had self-confidence issues when it comes to feeling wanted and loved,” said Crazy Clover Cosplay. “I’ll admit that I have felt a closer connection to Harley after going through what I did, though my past relationships could never hold a candle to what many others have gone through in their lives. It isn’t even close to Harley and the Joker.” So, is fiction, and by extension playing out your favorite fictional character, a danger or catharsis?

The idea that abuse survivors could find familiarity and strength in a character like Harley Quinn is not new, and it is often the opposing response to criticism of the popularity of the character and her portrayal. Harley Quinnsane, a cosplayer and roller derby girl, says, “She brought me into the cosplaying world. She helped me find an identifier.” Shauna Lynn, the youngest of our interviews, would probably be placed in the demographic that romanticized merchandise is geared to. She said, “The main thing that appealed to me is that Harley Quinn is such a sweet girl who is over her head over someone who abuses her. I feel like I can relate to her because all people ever want is to be loved and I feel that Harley learns she needs to be strong for herself.”

The fall of Harleen Quinzel into Harley Quinn may seem familiar to some victims. “I adore both Harley and Joker purely for the fact I feel they are the way real love is portrayed. And no I don’t mean with the physical abuse or even the mental, I mean in the sense that you take this innocent woman, a woman who was going to accomplish good things until she fell in love,” said Becca Payne. “You have all these fairy-tales and stories that push the fact that true love conquers all, that it’s the most amazing and great feeling in the world and once you have it, you have it forever. Their love isn’t the type of love you grew up reading about, they didn’t push the fact that love is your happy ending.”

The debate between fictional violence creating real violence has been going on forever, and we aren’t about to start digging into that. We also aren’t going to get into a discussion about whether or not the Joker genuinely loves Harley; it’s an entire conversation to itself and has been handled with plenty of panels and screenshots before. What can be said is that domestic violence in fiction has been said to provide understanding about domestic abuse in everyday life.

Crazy Clover Cosplay tells us, “it gives us a look into a world that we might not ever know, but I believe that by appreciating stories that involve these kinds of things and growing to love the characters in them, we can learn greater compassion and love and appreciation for those in the real world that have experienced these things.”

Becky Taka Cosplay believes it can provide a way for others to understand abuse in relationships. “While sometimes it seems that the Joker actually cares for Harley, a true sociopath is not able to express empathy, and that fact is unfortunately very frightening because it is very real. Even if someone hasn’t experienced an abusive relationship firsthand, maybe reading or watching the situations that arise between the two characters, could serve to help raise awareness of those issues.” These characters may be garish and do ridiculous, completely unreal things; they literally dress like clowns. However, that doesn’t mean that their relationship can’t feel real, and their actions don’t mirror real life violence on a human level.

Next week, we continue our three part series on cosplay and fictional abuse. Stay tuned. 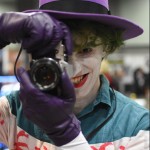 One comment on “Psycho Killers and the Women Who Love Them: Harley Quinn, Abuse, and Cosplay Pt 2”